What are Dropbox comments?

There are two ways to add a comment: From the Finder/Folder on your desktop, or via the Dropbox.com website. Here’s the view from Finder. Look for the “add comment” option when right-clicking on the selected file: 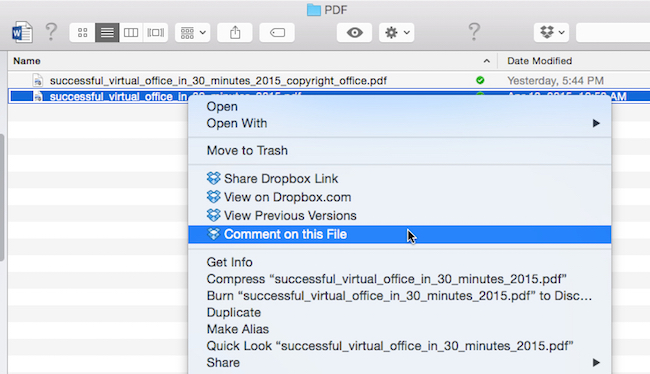 Once making the selection, you’ll be brought to the Web preview on Dropbox.com (login required). You can also add a comment directly from Dropbox.com. Here’s the interface, with a preview of a Microsoft Word document (the manuscript for our Virtual Office book) on the left and a note to myself on the right:

Other features of Dropbox comments

The Dropbox comments feature is useful, especially considering they can be appended to files that normally can’t be commented on, such as image files. However, once the files leave Dropbox (for instance, via export or unsharing) the comments are not ported out. In addition, the comments feature does not appear in the Dropbox mobile app (I tried iOS 8.3), although I would expect Dropbox to at least add a comments previewing feature in the future.

Have you tried Dropbox comments? What do you think?

Dropbox: How to set up sharing

A reader of Dropbox In 30 Minutes had an interesting question: How do you enable sharing of files and folders in Dropbox beyond your immediate connections? This short blog post explains the two basic options which allow a wider “friends of friends” sharing.

If you share links from the Desktop or Dropbox mobile app (as described in Chapter 4) that shared link can be shared endlessly. In other words, if you share a Dropbox link on your desktop or iPhone or Android phone, and paste it into an email, and then send it to Friend A, that friend can in turn forward the link to Friend Z and that person will be able to access it (even if you don’t know Z personally). Friend Z can then share it with his or her circle via email, Twitter, Facebook, etc.

If you share a folder (by clicking the rainbow icon while on Dropbox.com) you are given the option of allowing others to share. You enter that person’s email address, and then check off a checkbox that says “Allow members to invite others”. If checked, the person you shared it with can invite others to share. Here’s what it looks like: 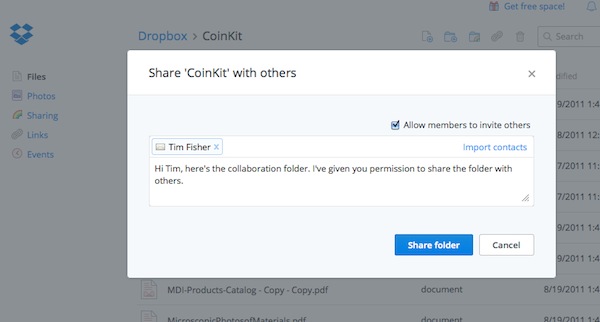 Of course, if you open up Dropbox sharing, there is the risk that people or organizations you may not know or trust gaining access to the files or folders.

For more information on Dropbox sharing, download Dropbox In 30 Minutes, which explains how it works and best practices for Dropbox collaboration. 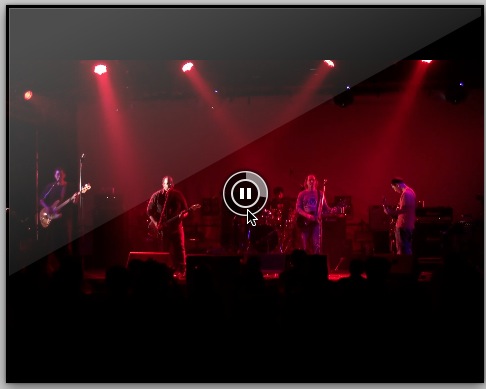 If you use Dropbox for collaborating with colleagues, classmates, and other people, eventually you will have a scenario that requires you to unshare a Dropbox folder.

What is a shared Dropbox folder? As explained in Dropbox In 30 Minutes, sharing the contents of a subfolder means at least one other collaborator will be able to add, delete, or change files in a folder that you “own” (that is, you created it, and added files, photos, or other content to it). It doesn’t matter if the other users have different operating systems. There is no limit to the number of other Dropbox users who can share a folder.

Why would you want to unshare a folder? Typically, you no longer need to work with the people who you granted access to. Maybe the project or class assignment is over, or someone left the company. Whatever the reason, you want to end their shared access. However, as shown in the video below, there are ways to give the other people in the folder access to copiies — or make sure that they don’t have access to copies of the files, even if they added some of them to the folder!

This short video tutorial shows you exactly what to do to unshare a Dropbox folder. To learn more about sharing, consider purchasing our Dropbox guide.

How to kick out other users from a shared Dropbox folder

In less than 3 minutes, the following video will demonstrate how to kick out another user from a shared Dropbox folder. “Kick out” may sound mean, but it’s actually the term Dropbox uses!

Why would kicking out another user be necessary? Perhaps the other person no longer needs to collaborate on the files in the folder, or he or she has been fired. Whatever the reason, this video shows how to review and select other users for ejection.

This method of kicking out other people can be used by owners of shared Dropbox folders. If you are merely a member of the shared folder who was invited by the owner, you can’t kick anyone out — but you can leave (explained in this video). The video also describes some special considerations relating to files contributed by the person being kicked out.

The narrator of the video is the author of “Dropbox In 30 Minutes”, a quick guide that not only explains how to set up Dropbox, but also shows how to leverage special features for collaboration and document sharing. See the contents of the guide here, and view purchase options here.

To view the video full-screen, press the rectangular icon at the bottom of the YouTube video player:

Dropbox tutorial: How to leave a shared folder

This 2-minute video demonstrates how to leave a shared Dropbox folder that a friend, colleague, or someone else created and invited you to join. It shows the steps required to find and leave the folder, and the options to keep copies of the files.

This and other techniques are explained in depth in Dropbox In 30 Minutes, available as an inexpensive paperback, ebook, PDF, or file download. Visit this page to see what’s inside, and learn about purchasing options here.

To watch the video, press the player button below: